This is How Spray Foam Insulation was Born 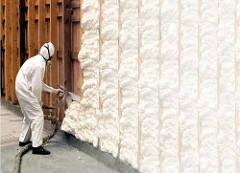 Spray foam insulation as it’s understood today really emerged in the 1980’s, however its roots are found numerous decades earlier, starting with Otto Bayer’s development of polyurethane foam in the 1940’s.

Otto Bayer, an industrial chemist in Germany, really began working with polyurethane throughout the late 1930’s. The United States gained access to this innovation in the early 1940’s through the president of Mobay, David Eynon. Mobay was a war effort corporation produced from the partnering of two chemical industry giants, Monsanto and the Bayer Corporation. Otto Bayer was not related to the founding family, although he did work there.

Throughout the 1940’s, polyurethane polymers were used mainly for military and aviation applications. The production of war machines for use in World War II directed the majority of the applications of these state-of-the-art plastic polymers throughout of the war.

Baughman’s Blendometer was still at least a partially manual procedure, involving the tilting of trays of chemicals to mix foam. The technology was still in its infancy and over the years that followed, advancements were made in automobile applications.  While a variety of uses for polyurethane polymers would be explored, it would be over two decades before use as home insulation would become widespread.

In 1963, Fred Gusmer introduced the first spray machine technology. Over the next ten years advancements were realized which made the spray foam’s use as home insulation more efficient and affordable. The energy crisis of the 1970’s encouraged the idea of the “super insulated” home and fueled further technological advancement, laying the groundwork for modern applications.

The development of the spray nozzle saw spray foam insulation becoming more widely used in homes. It allowed the chemical mixture that initiated the foam’s expansion to be individually delivered separately, mixing just before dispensing. 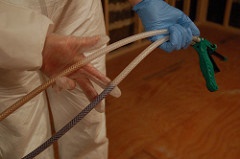 During the 80’s and 90’s, much discussion was had over the benefits of closed vs open foam insulation, even water blown foam was under consideration, however much of this was from a marketing perspective as business competition ensued.

A measure to identify energy performance, called R-value requirements, ended much of the controversy as it clearly defined closed foam as the most effective at achieving energy efficiency.

As such, closed cell spray foam has been identified as a structure requirement to ensure homes in hurricane and earthquake zones are as structurally sound as possible, while improving stability. The structural benefits of utilizing spray foam makes it a smart decision for any homeowner, no matter where the home is built.

Today, you will find the premier builders of quality custom homes will use spray foam insulation to ensure the new home is energy efficient and providing the best value to their customer.  You can rest assured a builder using spray foam insulation is on the cutting edge of innovation as it relates to new home construction and is offering outstanding value in their homes.